Nicknamed “Cachita,” and revered by Catholic and non-Catholic Cubans, La Virgen de la Caridad del Cobre is Cuba’s Patron Saint. In the Santeria faith (a synchronistic religion practiced in Cuba and elsewhere) Cachita is paired with the Orisha “Ochun.” Orishas are Yoruba deity.

Sometime around the year 1612, La Virgen de la Caridad appeared to a young black slave boy and two indigenous Cuban brothers. The boy, named Juan Moreno, was nine or ten years old at the time. The native brothers were Juan and Rodrigo De Hoyos. Commonly referred to, throughout Cuban history, as “Los Tres Juanitos,” the trio had gone on a canoe expedition to retrieve salt which was to be used for the preservation of meat at the Barajuaga slaughter house in El Cobre. El Cobre (Spanish for “Copper”) is an area in the Sierra Maestra region of El Oriente in the province of Santiago de Cuba, where I was born.

In October of 2002, I returned to Cuba, for the first time since I had left the island as a toddler. During my homecoming, I visited the statue of La Virgen de la Caridad del Cobre, in the basilica, where she is housed. Here I am to the left, standing in front of Caridad.

My mother and two of my siblings and I had returned to Cuba to sit at the bedside of my mother’s ailing brother, Carlos. In my second day on the island, Carlos died, in our presence, of lung cancer. He had just turned 55.

After Carlos’ passing, my brother José and I went with our cousin Jaime and Tio Juan (my mother’s oldest brother) up into the mountains to visit La Virgen de la Caridad del Cobre and offer prayers for Carlos’ soul, for our ancestors and for the hundreds of our impoverished relatives who have remained on the island of Cuba. Below is a picture I took of my brother José on our way to see Cachita. The basilica is visible in the background of the picture.

The cathedral was empty, outside of peddlers who pushed wooden statuettes of Caridad into our hands. When we refrained from purchasing souvenirs; the vendors, agitated erupted with anger. One peddler scornfully yelled at me, “¡Puta Americana!” (“American whore!”) Another angrily threw a statuette of the Virgin at the ground by my brother’s feet, shattering it to pieces. We tried explaining to the frustrated peddlers that we have hundreds of hungry relatives on the island to whom we had given every last penny in our pocket, every last sock in our suitcase, every last suitcase with which we had come.

In the back of the cathedral, inside of the rectory doors, a woman in uniform was seated, selling faded pamphlets made of thin paper about the history of the Virgen de la Caridad del Cobre. I tried reading one, but the lady forebode me to do so without buying one. I gave her the same explanation about my hungry relatives, but she still wouldn’t allow me to read it.

At an alter in the first floor of the cathedral were strewn all sorts of personal items as offerings for Caridad. A long-locked nephew of my mother’s, who had recently fled to America from Cuba, said that upon his return to the island; he would cut off his ponytail and leave it as an offering for Caridad whom he calls Ochun. My cousin practices Santeria and his patron Orisha is Ochun.

Santeria arose from a merging of the African religion, known as Yoruba, and Catholicism, which was imposed upon the slaves and the Cuban natives by the reigning Spaniards. Slaves, imported to Cuba from Africa, clandestinely practiced their Yoruba faith by disguising the names of the Orisha behind masks of Catholic Saint names. Ochun, being the Orisha of love, matrimony and motherhood was syncronistically paired with La Virgen de la Caridad del Cobre. For a more detailed explanation of Ochun and Santeria, please see my painting, “Ochun Sees Birth.”

It is relevant to the history of Cuba’s cyclical suffrage, that its patron Saint (La Virgen de la Caridad del Cobre) came to the world through the eyes of a young slave boy and two indigenous Cuban brothers. In most of the paintings that I have seen of the apparition of La Caridad, the slave boy is portrayed as a grown black man and the two indigenous brothers as Caucasians, sometimes with blond or orange hair. In my painting of Caridad, I wanted there to be no doubt, that Caridad was made visible to a nine or ten year old slave boy and two indigenous Cuban brothers. It was therefore that I made the slave boy bear-breasted in chains with the initials JG branded on his chest. The initials JG are referenced in another painting of mine. For further information on the branding of slaves in Cuba with regard to the initials JG, and to read a testimony of a Cuban slave, please visit my painting, “My Ancestors’ Arrival in Cuba.”

My eldest son, posed for me for the painting when he was nine years old (the same age that Juan Moreno was when he saw Caridad). I held our youngest son at the time, our baby, in my arms as my husband, snapped a picture of us. I used the photograph to paint Caridad and her baby Jesus. The two native brothers I painted from my imagination.

Not certain from which indigenous Cuban tribe the two brothers hailed, I painted on the canoe engravings of Taino effigies. The Tainos, were part of the Arawaks. The Arawaks were natives who lived in Cuba and all throughout the Caribbean. They had migrated to the islands from South America. Indigenous to the Oriente of Cuba, was another tribe called Siboney. My father’s grandmother Clemencia was a pure Siboney. She died, during Cuba’s War of Independence from Spain, as a victim of the Spaniards’ cruelty. For more information on my grandmother’s story, please see my painting, “Mambi en la Manigua: A Portrait of my Abuelo José Rodríguez Figueroa.” The Siboney were nearly exterminated by the Spaniards. In homage to my great-grandmother Clemencia and all of my indigenous Cuban ancestors, I painted the word Siboney on the other side of the canoe.

The red, white and blue feathers on the brothers’ ponytails represent the Cuban flag. I attempted to make the waves appear a bit like waterfalls, because Ochun, also known as the Orisha of sweet waters, is associated with waterfalls. The two fish I painted in the water are symbolic of the two fish and the five barley loaves, belonging to the little boy, with which Jesus fed thousands on the mountainside near the Sea of Galilee, just prior to the Jewish Passover Feast. (John 6:8)

In my painting I neglected to put a crown on the baby Jesus for two reasons. The first reason relates to John, Chapter Six. After the mentioning of the miraculous feeding of the multitudes with just two sheer fish and five loaves of bread, John 6:14 continues with the following:

“After the people saw the miraculous sign that Jesus did, they began to say, ‘Surely this is the Prophet who is to come into the world.’ Jesus, knowing that they intended to come and make him king by force, withdrew again to a mountain by himself.

In making the baby Jesus crownless, I attempted to emphasize this humility of Christ’s. I painted the Christ Child playing with the trio in the boat to emphasize Christ’s humanness. The second reason I did not paint a crown on Jesus, but on Mary only, was to give attention to the adoration of the Sacred Mother in Catholicism and Santeria. 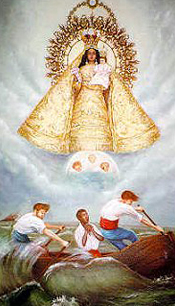 Caridad’s statue rests high on a pedestal in an alcove on the second floor of the cathedral. As I gazed at the statue, I wondered if it was an original artifact which the Tres Juanitos found back in the early 1600’s, or if it was merely a statue made after the trio had seen the apparition of the Virgin.

I had been familiar with the testimony which Juan Moreno left. However, in reading Juan Moreno’s testimony it was not clear to me whether the trio had seen an apparition or whether they had actually stumbled across this little statue, floating in the sea. Juan Moreno testified that he and the indigenous brothers “saw an image of our Lady, the Holy Virgin.”

I was hoping to have my questions clarified upon reading the brochure which I was not allowed to read without purchasing, at the basilica in the Cobre. On the internet, I had found only contradicting accounts that erroneously interpreted Juan Moreno’s actual testimony. Next time, I go to Cuba, I will research the topic further at the Basilica del Cobre and in the national libraries and museums of Santiago. So far, this is what I know about Los Tres Juanitos’ encounter with Caridad:

In a canoe, on their way to the salt mines, the trio had encountered stormy weather. They camped overnight at Cayo Francés (the French Keys). When the weather cleared, they set to the seas again, before sunrise. On their way, they came across an image of the Virgin Mary. More than seven decades later, speaking in the third person, Juan Moreno (the slave boy) left a testimony (in Spanish), recounting the events that he had witnessed as a child. He said the following.

“Having camped in the French Keys, which is in the middle of the Bay of Nipe, waiting for a good time to leave for the salt mines, being a morning of calm seas, they left the French Keys, before daybreak. The aforementioned Juan y Rodrigo de Hoyos and myself, embarked in a canoe, headed for the salt mines, and far from the French Keys we saw something white above the foam of the water, which we couldn’t distinguish what it could be. As we got closer, birds and dry branches appeared. The aforementioned Indians said, ‘It looks like a girl.’ While they were discussing, they saw an image of our Lady, the Holy Virgin, on top of a small wooden plank, holding the baby Jesus in her arms. On this small tablet, was written in large letters, which the Indians read and said, ‘I am the Virgin of Charity.’ Looking at her clothes, they realized that they were not wet. In seeing this, full of joy they each took only one third of salt and came to Hato de Baragua.”

I translated the above from Juan Moreno’s original quote in Spanish below.

Inside of the the cathedral there pervaded a sort of peaceful yet melancholic spirit which seemed to empathize with the poverty, plaguing the city of Santiago. Standing before the statue, I asked Caridad to intercede on behalf of all the souls in Santiago de Cuba, whose impoverished lives I could never adequately describe in words.

In October of 2006, I spent nine days in Bangalore, India with my family for my brother Dan’s wedding to a wonderful Indian woman named Anupama.

To the right is a closeup of Caridad which my mother took on her video camera. Caridad’s complexion has been described as “mulata,” the expression on her face as “compassionate.”