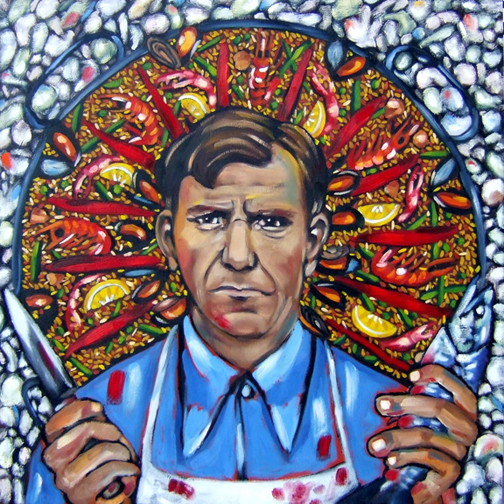 My mother’s father, Julio Pallerols Estivill, was a paella cook in his brother’s pensión in Santiago de Cuba. Born in Tarragona, Spain, my Abuelo Julio moved to Cuba when he was 20, to avoid being drafted in the Spanish Army for war in Morocco, which was at that time a colony of Spain. In Cuba, My Abuelo Julio fell in love with and married my Abuela Princesa (my mother’s mother) who was half Jamaican half Chinese. Together, they had ten children. My mother was number eight.

To the right is a picture of my Abuelo Julio and My Abuela Princesa with their ten rainbow children. The two extra children pictured, are a grandbaby (top row) and a neighbor (young girl, standing in the bottom row). My mother is seated in the front row to the far left, with the Chinese eyes.

I was very young when I left Cuba, so I don’t remember my grandfather. My mother is still the only one in her family to have left Cuba. Her father died before we ever got to see him again. My mother describes my Abuelo as having been a simple man, very content and peaceful. He was a loving person, whose warm smile froze into a scowl, whenever he was photographed. I made a paella as a halo for my Abuelo, because my mother remembers her father as having been angelic. My mother enjoyed a close relationship with her dad.

I remember very clearly when my Abuelo died. We were living in New Jersey. When my mother received the yellow telegram, notifying her of her father’s passing, my father was on a business trip in California. I was in kindergarten at the time.

I remember my mother weeping, as she drove me and my siblings, in the old white Chevy, to a friend’s house, seeking comfort. The “Lion’s Song” (by the Tokens) was playing on the car radio. To this day, whenever I hear that beautiful song, I flashback to that moment of my mother crying at the steering wheel. I remember my mom’s distress over not being able to attend her beloved father’s funeral on account of bad politics between the US and Cuba.

The photograph, above left, is the image from which I drew my Abuelo’s portrait for the painting. The picture to the right of it is of my lovely mother in July, 2006 at my brother Dan’s wedding to Anupama in New Jersey.

My mother and father retired from the US to Spain almost twenty years ago. Spain is where we lived immediately upon our departure from Cuba. It is also where, for years, our family had maintained a summer home. My parents live on the southern Mediterranean coast, near Valencia, which is where paellas originated. Two of my siblings live in the same town as do my folks.

Creating a paella dish is an artistic task in itself that requires great attention. I tried, in my Abuelo Julio’s portrait, to show the seriousness with which my grandfather regarded the artistry of his work as a professional paella cook. I realize that I may have inherited my mosaic tendencies, in my paintings, from my Abuelo’s creativity as a paella maker. The paellas my Abuelo cooked were in themselves brilliantly designed seafood mosaics. My mother and my sister Georgi (pictured left) commemorate my Abuelo’s artistry when they attend to the detail in design of the paellas that they cook together. As did my Abuelo, they carefully lay red peppers aside green beans, purple shells against yellow rice. Both my mother and sister happen to be very talented artists on paper as well as in paella.

My sister Georgi has lived in Spain since she graduated from college. When I think of Spain, I think of time spent with my sister Georgi, sunning ourselves on the white pebble beaches that surround her home in Spain which overlooks the Mediterranean, a mile down the hill from where my parents enjoy the same spectacular sea view from their home. The seemingly white pebbles on those beaches are actually full of color. They seemed a natural choice for the background of this painting.

The pan upon which paella’s are cooked are called “paella.” They are traditionally made of iron but are now often made of stainless steel. Most paellas have two handles on opposite sides. However, the giant-sized pans may have four handles. I made the paella halo behind my Abuelo’s head a four-handled paella to symbolize the largeness of my Abuelo’s soul. Paellas are shallow and cooked with olive oil, over firewood. The ingredients are rice, vegetables, snails, squid, shelled- seafood, chicken, lemon and saffron.

In July, 2006, my sister Georgi came to our brother Dan’s wedding in New Jersey, with a paella dutifully tucked into her suitcase. Georgi made a paella feast for our brother’s wedding rehearsal dinner. The picture to the right is of Georgi’s eldest son, Ruben, holding his mother’s finished paella. Yum! Yum! Thank you, Georgi! Thank you, Mami! Thank you, Abuelito!