Click here to listen to an interview on KPFA with the curator Brenda G. Williams and artists Lezley Saar and Dana Weiser

by Carolina A. Miranda

“Cross Fade,” at Walter Maciel Gallery. Now in its final week, this group show in Culver City takes the cinematic convention of the cross fade (that moment in which one scene fades away and a new one fades in) as a point of inspiration for a group show. The exhibition features work by six women artists who all play with questions related to the fluidity of gender, history and identity. Through Aug. 16, 2642 S. La Cienega Blvd, Culver City, waltermacielgallery.com.

Below are my three works in the exhibition: 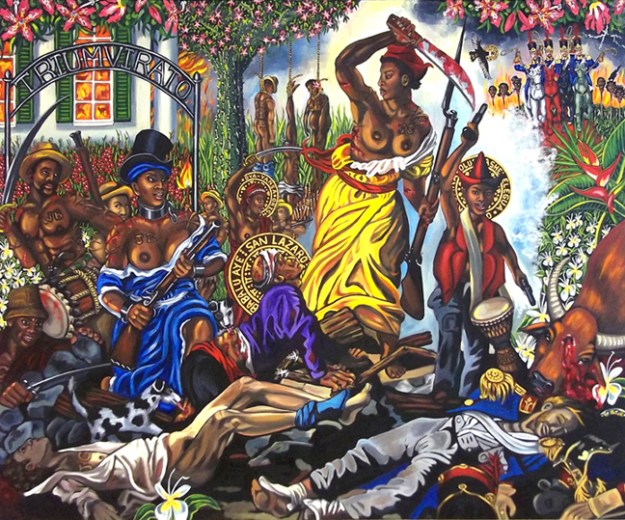 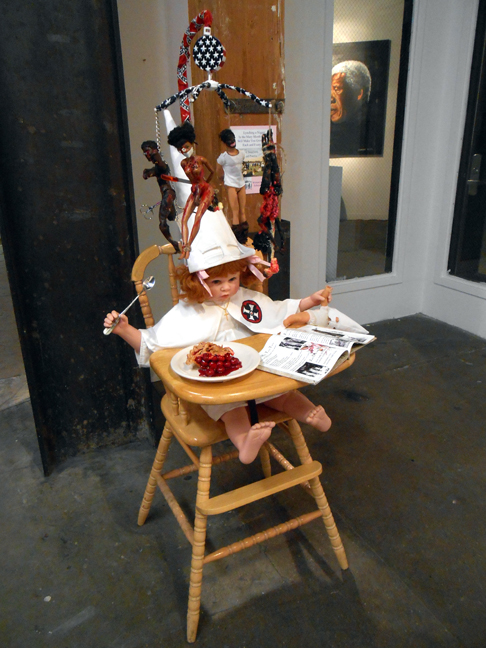 Click on links below for press and media reviews that mention the above works:
(Note: There is no press yet available on Carlota Slaying the Slayer because I just completed the painting on July 12, 2014)

As American As Cherry Pie:

Cross fade is defined as a cinematic technique that allows for one scene to gradually fade away while the next scene subtly appears.  Similarly, the group of work presented in Cross Fade unfolds as a cohesive conversation between a series of installations, sculptures, paintings and video revealing different cultural contexts and identity of African American and Asian American women.  The physicality of the work is often presented in a variety of formats including text to create a specific message, drag to convey a certain type of character, collage to connect the past and memories and repurposed objects to display historical events.  Furthermore, these visible frameworks, subjects and ideas project a feeling or mood beyond what is seen.

Within the context of the exhibition, the dialogue does not follow one particular thread or trajectory; but rather questions the surface and emergence from vastly different positions. Video works by Tameka Norris and Kim Ye include the use of costume and props to challenge the reaction of their characters and their specific identities as a way of taking control of the viewer.  For example in the video Meka Jean: Too Good for You Norris explores her sexuality and personal desire to be in control of certain situations, but the viewer begins to question her control through the observation of her demeanor and character.  In contrast, Ye’s search for identity includes objectifying those who are part of her race and gender as noted in her piece Ultimate Match. Differing from her videos in the past that simply documented performances, Ye creates a false dating service featuring Asian women as the subjects with images and information suggesting only white men are welcome to apply.

Punctuating these works, Lezley Saar and Lili Bernard instigate moments of allegiance and shared experience that reveal how birthright and family history collectively create vital moments of one’s political potential. Saar’s work explores her visions of identity, history, place and family as noted in the painting Therese Raquin depicting the bi-racial subject of the French novel by Emile Zola.  The painting features a woman in Victorian dress whose lower body morphs into Saar’s clever interpretation of a family tree blossoming with visual memory bubbles that highlight moments in the novel.   In comparison, Bernard explores her birthright and heritage by retelling explicit historical events relating to her culture; more precisely ”Black Female Identity as influenced by colonization”.  In the sculpture American As Cherry Pie a doll clothed in traditional Ku Klux Klan garb sits in a highchair ready to devour a piece of cherry pie. Hanging from a patriotic armature, bloodied “ethnic” dolls represent the victims, Mary Turner and Laura Nelson who were lynched with their children in the early 20th century.

Projects by Dana Weiser and Christine Wang share the moments of confrontation and triumph over identity. Weiser etches selected words collected from derogatory phrases directed towards her into a mirror and has the viewer self reflect while reading the remarks. For example, the piece entitled Where Are You From? includes the question shown as text etched within a dainty floral inspired pattern revealing the awkward conversations of the artist’s past.  Wang rages against stereotypes by playfully using words and imagery that comment on topics ranging from politics and religion to pop culture and consumerism thus challenging the viewer’s notion of bias.  In her painting I Like White Cock an image of a nude male body lays across the foreground of the painting with a black line painting of a oversize penis extending from the groin.  The content purposefully ignites controversy with a reverse play on racism while poking fun at inherent human behavior.  Together, the projects presented in this exhibition surround the viewer with a diverse set of contexts and ideas within which the motifs of identity, experience and culture are continuously faded onto one another.

Brenda G. Williams is a local art consultant specializing in emerging contemporary artists. She attended ClarkAtlantaUniversity and majored in communications. Williams began her art career in Italy selling works on paper from a local gallery before returning to the states to manage the Eyes Gallery in Philadelphia.  She moved to New York to work as a set designer on the movie Boomerang and began working for Yosi Barzilai at Sarajo where she sold tribal art and textiles, as well as Haitian art.  Williams later moved to Los Angeles and immersed herself in the contemporary art world working on various independent projects.  Her latest venture is a blog called ADDOBBO featuring images of contemporary artwork that she finds interesting and collectible. Williams organizes and leads an art group visiting galleries, museums and artists’ studios quarterly.

“We have become accustomed to considering identity as a means of talking about the individuality and characteristics of self. There have been many skilled artists in history and even today who can reproduce precisely the reality of the emotions and significance they experience before them. But as identity expression has evolved, artists have increasingly felt a freedom to do more than retread all the previous material.

My vision is to present work that discusses identity, specifically African American and Asian females at the intersection of race, identity and behavior. I want to create a discourse using trigger images to get the audience to look honestly for answers about ethnic groups and identity.

Contact between the two different cultural and linguistic groups I’ve selected contributes to an increased need to develop symbolic expressions of identities and to the formation of identities that are hybrid and complex. Identity is ever-present in practices of multilingualism and multiculturalism. Identities both shape and are shaped by language and cultural expressions, hence an inherently reflexive relationship.

This exhibition will demonstrate a range of approaches by contemporary established and emerging female artists seeking to respond in their work to the rhythms and complexities of their place in the existing culture. Driven by a desire to depict not only a visual image of a place, but the feeling that is elicited when one truly experiences a place.”  — Brenda G. Williams, Curator