Carlota Lucumí (died March 1844) was an enslaved Yoruba woman in Cuba who survived the Middle Passage as a child and was a leader in the Matanzas, Cuba slave rebellion of 1843.  Harriet Jacobs (1813-1897) was an American author, abolitionist and fugitive slave who wrote the autobiography, Incidents in the Life of a Slave Girl, published in 1861

An art and #metoo conversation between the feminist artist-activists, Lili Bernard, Zeal Harris and Caroline Heldman. The talk will explore, through the lens of art and activism, the roles that ingenuity, performance, resilience and sisterhood play in the survival of the sexual attack on womanhood, from antebellum slavery through today’s #MeToo movement.

LILI BERNARD M.F.A. is a Cuban-born, Los Angeles-based interdisciplinary artist of mixed African, Caribbean, European and Chinese descent. Her work examines issues of sexism, racism and trauma.  A mother of six whom she birthed in a ten-year span, Lili is an award-winning exhibiting fine artist, actor, published writer, independent curator, educator, community organizer, public speaker and founder of BAILA: Black Artists in Los Angeles. Raised predominantly in Princeton, Jct., New Jersey, and a  graduate of The American School in Japan where she spent 11th and 12th grade, Lili attended Cornell University and The City University of New York, earning a B.A. in German. She received her MFA in Visual Arts/Public Practice from Otis College of Art and Design. In the fine arts, Lili’s numerous credits include a 2017 solo exhibition at Museum of African Diaspora and favorable reviews in a multitude of mainstream art periodicals, including ARTnews Magazine. As an actor who has performed extensively in NYC Off-Broadway theatre, on television Lili starred in the BBC film Murder in Oakland, co-starred in Stephen King’s Golden Years, and guest-starred on Seinfeld and The Cosby Show. A Cosby survivor-turned public-figure antirape activist, Lili influenced the abolishment of the statute of limitations on rape prosecution in California with her #EndRapeSOL peers, as well as the gubernatorial signing of three #MeToo bills on employment sexual harassment and assault. Currently, she serves as co-chair of #ERAnow.

“I create narrative artwork that chronicles sexual, racial and domestic violence, in a collision of cruelty against compassion. Autobiographical anecdotes of childhood abuse, adult rape and suicide attempts intertwine with socio-cultural struggles of my Caribbean immigrant family and ancestors, mirrored in contemporary American life. Afro-Cuban religious iconography and history tether together survivor-ship stories of the past and present. The unconquerable nature of the human spirit reigns over the impact of trauma.” — LILI BERNARD

ZEAL HARRIS, M.F.A. creates urban-vernacular visual stories.  Her influences are highly eclectic and include; Southern Black folk art, Asian scroll paintings, Persian miniatures, Mexican ex-votos, and Afrofuturist literature.  She lives in Los Angeles and is from Virginia and Washington D.C.. Currently, she is working on two series of artworks. One project, Pantheon of Akatas is about ancestral-mother-maroons on the brink of ethnogenesis while on a quest for promised land.  Her other project, I Be Livin’ Black Love, will become a book.  It consists of black-feminist themed illustrations of contemporary life.

Zeal is also an Arts & Liberal Studies lecturer at Otis College of Art & Design and at California State University at Fullerton.

“My work is about experimental storytelling. It’s about collecting, telling, and revealing characters on journeys through space and time. Whether the work is a micro-narrative or an epic, linear or non-linear, or whether it is a recognizable or an obscure narrative, the characters in my paintings are vehicles whose stories serve to complexify grandnarratives of black lives. Always, I am seeking new angles to prompt fresh dialogue about sociocultural issues. Race, class, gender, culture, love, war, and the mystical coexist in this world. Oral culture is privileged. While my work is unabashedly political, it is also sentimental, and critical. I am most pleased when my work prompts fresh dialogues through multiple academic discourses and diverse audiences. With my work, I am committed to documenting the breadth and depth one African-American woman’s representational imagination and her concerns. Leaving trace— signifyin’ this life to others is the benediction.” — ZEAL HARRIS

DR. CAROLINE HELDMAN, PhD is the Executive Director of The Representation Project, a Professor at Occidental College in Los Angeles, and the Senior Research Advisor for the Geena Davis Institute for Gender in Media. Her research specializes in media, the presidency, and systems of power (race, gender, ability, and sexuality). Dr. Heldman has published five books — Rethinking Madame President: Are We Ready for a Woman in the White House?; Protest Politics in the Marketplace: Consumer Activism in the Corporate Age; Women, Power, and Politics: The Fight for Gender Equality in the United States; The New Campus Anti-Rape Movement; and Sex and Gender in the 2016 Presidential Election. Dr. Heldman has been active in “real world” politics as a professional pollster, campaign manager, and commentator for CNN, MSNBC, FOX News, and CNBC. She has also been featured in popular documentaries, including Misrepresentation, The Mask You Live In, The Hunting Ground, Informant, Equal Means Equal, Liberated, This Changes Everything, and Nevertheless. Dr. Heldman was one of many women who went public with allegations of gender discrimination against Bill O’Reilly that led to his firing from Fox News. She splits her time between Los Angeles and New Orleans where she co-founded the New Orleans Women’s Shelter and the Lower Ninth Ward Living Museum. Dr. Heldman also co-founded End Rape on Campus (EROC), Faculty Against Rape (FAR), and End Rape Statute of Limitations (ERSOL)

A singer and performing musician, Caroline Heldman is the founder and lead singer of ALLISON CHAINS, the world’s only all-female tribute to the band, Alice In Chains. Based in Los Angeles, Allison Chains delivers heavy metal riffs, hypnotic musical textures, and unique harmonies, creating the haunting, tortured sound that put Alice In Chains at the forefront of Seattle’s early grunge bands. Allison Chains has performed at festival venues, the House of Blues in various cities, the Hard Rock Cafe, Seattle haunts (The Crocodile Cafe, Phoenix Underground, The Vogue), and on the Sunset Strip (Whiskey a Go Go, The Viper Room, The Roxy Theater).

“Acknowledging the work of earlier activists also means acknowledging that we have been here many times before, and, despite these efforts, we have yet to effectively extinguish sexual harassment/violence in our culture.” — DR. CAROLINE HELDMAN

Music and live coverage of the fair by KTPC 99.1 FM

Food and drink by Berg Catering.

Our three-day art fair brings over 80 artists together to transform The Kinney Venice Beach hotel into a unique and exciting contemporary art experience. Meet and buy artwork directly from the artists themselves in an approachable and relaxed environment where the art and artists come first.

stARTup LA is less than a mile from the Venice Beach Boardwalk and walking distance to Abbott Kinney’s shopping district. The fair is happening on the same weekend as Frieze Los Angeles at Paramount Pictures Studio, Art Los Angeles Contemporary at The Hollywood Athletic Club, and the Felix LA at The Roosevelt Hotel. It will be an exciting weekend of art! 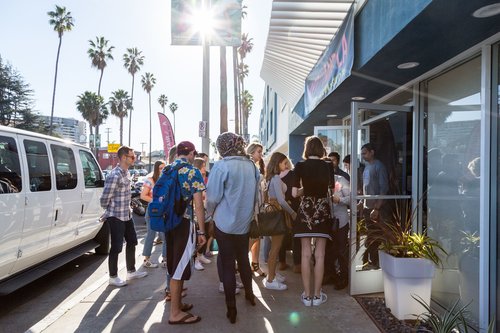 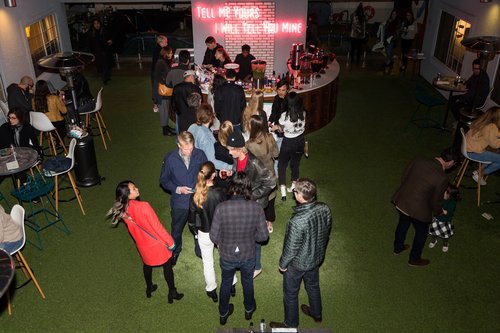 VIP tickets include admission to all three days of the fair, an invitation to the “First Look” preview Friday from 6-7pm, all access to the VIP lounge and bar, and exclusive VIP tour and other benefits.