“War criminals, no matter how many decades have passed, cannot evade prosecution…I am asking you to do the same thing for us, rape survivors, who survived the war upon our body.”
– Lili Bernard 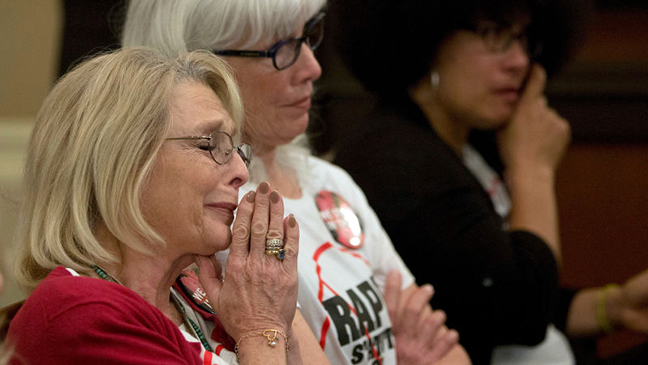 Before the end of the month, Gov. Jerry Brown must decide if he will sign or veto California’s proposed SB 813, which would abolish the statutes of limitations on sexual assault crimes in his state. If he signs, California will become the 17th state with no limitation on when a rape victim can pursue charges after an attack.

The bill was written by State Senator Connie M. Leyva, and was supported by both parties. On Tuesday, she and many others gathered at the Sacramento state house to deliver testimony and urge Gov. Brown to sign. She told The Washington Post, “People are starting to realize rape is a serious crime… It does not happen by accident. It’s a conscious decision by a rapist. The victim should always have the opportunity to come forward.”

The current limitation on reporting a sexual assault in California is 10 years, but the bill is in large part attached to the number of women who have come forward with accusations against Bill Cosby, accusations that are too far in the past for prosecution. The Associated Press reports that lawyer Gloria Allred, who represents 30 of Cosby’s alleged victims, was there to give testimony along with several of her clients. She said in a statement, “For most of them, it is too late to have their day in court against Mr. Cosby because of the statute of limitations… The door to the courthouse is slammed in her face.”

There were objections to the change represented in the hearings as well, with Natasha Minsker of the American Civil Liberties Union stating that ending the limitation would lead to more wrongful convictions, since witnesses’ memories would be clouded and evidence faded. Carolyn George, representing the California Public Defenders Association, said that the 10 year limit encourages victims to come forward speedily and investigators to work quickly.

Actress Lili Bernard has alleged that Bill Cosby raped her, in the 1990s, in New Jersey, a state which had a statute of limitations at the time. It has since been lifted. The LA Times reports that she took the stand to draw a comparison between her experience and a war crime, saying, “War criminals, no matter how many decades have passed, cannot evade prosecution…I am asking you to do the same thing for us, rape survivors, who survived the war upon our body.”