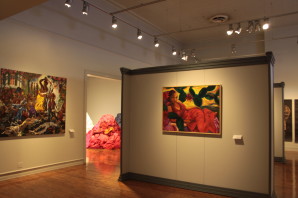 Despite the fact that women visual artists are prevalent in US art, only one fourth of the art displayed in American galleries and museums is produced by women.

A new exhibit, “LA Woman: Yesterday, Today, Tomorrow” opened at the Forest Lawn Museum earlier this month changes the balance totally. This unique exhibit represents 24 female artists who have made a tremendous appearance on the L.A. art horizon.

The United States is a country where women’s history is especially complex. In many corners of the world there are no differentiation between men and women in art last centuries but not in the U.S. The triumph of the women who are shaping public taste and opinion was not reached so easily in the U.S. A long fight for women’s rights finally gave women access to a special niche in art. In 1970 New York became the home of the Women’s Inter-art Center, and during same year Fresno State University opened its first feminist art class.

With the feminist movement, women’s art achieved new meaning. Early in her career, Judy Chicago, one of the exhibitors called herself an “art feminist” – trying her hand at “macho arts” normally associated with men such as boat painting, auto-body work and pyrotechnics, declaring that there is no difference between men and women.

“Ah , well , do I wish that we lived in a world where gender didn’t figure so prominently?”, she said once. “Of course. Do I even think about myself as a woman when I go to make art? Of course not.”

Gayle Garner Roski is one of six USC alumni and faculty, represented at the exhibition, showcasing her series dedicated to 9/11. She describes her feeling like “feet not contacting the ground” which is reflected in her pieces, “My Surprising Birthday party,” “My bedroom,” “My Birthday,” and “Shock.”

June Wayne is another Chicago artist who moved to L.A. Her oil painting, “The Dreamers,” plays a tricky visual game with viewers..

“This is the painting when I discovered my glasses were a wrong prescription, she said. “I had to back off of it to find out if it was working but the painting looked fuzzy. An eye doctor prescribed new glasses…saved the painting.”

“Christ and Angels Rejoice,” ”Medieval Musicians”, and “A Peaceful Christmas to All.”

Her pieces are presented in a technique of Linoleum Block and Wood Block.

Betty Saar, known for her assemblages, is represented by very surprising collages, ”Unseen boundaries” and two other works she calls Autographs.

Marisa Mandler, the youngest artist of the show, touches viewers with a sublime sense of fragility of subject and elusiveness of time. Her works are surprising in technique; Bleach compounds on paper, gold thread, gold pins and dimensions variable give a real feeling of infinity to her art.

The exhibition may appear a bit weird, even disturbing, but it is surprisingly unusual and deserves to be seen. The show runs Tuesday – Sunday from 10:00 a.m. to 5:00 p.m. until Jan. 5, 2014. Admission and parking are free.