More Than 700 Female Artists Posed for a Portrait, Seven of Them Reflect on the Experience

This KCET story is viewer-supported. 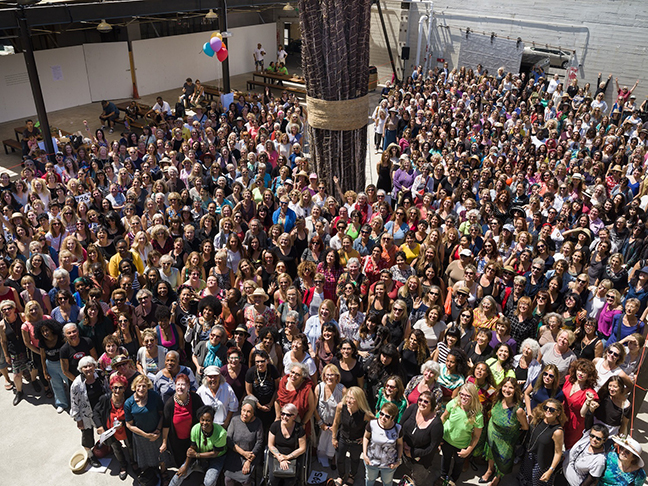 In a landmark art action last week, more than 700 female artists met in the courtyard of Downtown Los Angeles gallery Hauser Wirth & Schimmel for a group portrait. But more than the resulting picture, the happening — conceptualized by artist Kim Schoenstadt and titled “Now Be Here” — was a declaration on visibility. The self-organizing, participation, and subsequent documentation of the project is an affirmation that although not always represented in the art world, female artists are present and active in the city.

What follows is a collective text with multiple voices that reflect on communal energy, inclusion, and privilege.

Lili Bernard: In the morning hours prior to the “Now Be Here” photo shoot, at a cozy downtown L.A. diner, I met with some members of a group of multicultural, multigenerational, feminist artists who formally call ourselves, “The Association of Hysteric Curators.” We discussed our most recent exhibition, planned our next one, and then headed over to Hauser Wirth & Schimmel, where a throng of women artists were waiting in line. I was delighted to see so many artists whom I call friends, and to be able to meet and embrace others whose artwork I have admired for years, but with whom I had not yet been personally acquainted.

Kim Abeles: My longtime friend and feminist, Anne Isolde, drew me aside saying, “As large as this group is, it’s just the tip of the iceberg.” Rather than the tip of the iceberg, I told her, it was a tipping point. Lives were changed that day, through the bravery of Kim Schoenstadt, an artist with a good idea to photograph a small crowd of female artists that evolved into a massive rave.

Kathie Foley-Meyer: I’m typically shy in crowds, but quickly saw an artist I knew, and then another and another. I felt fortunate to meet in person some of the artists whose work I admire and whose names I’d seen in gallery listings online and in print, putting a face to the name and to the energy. 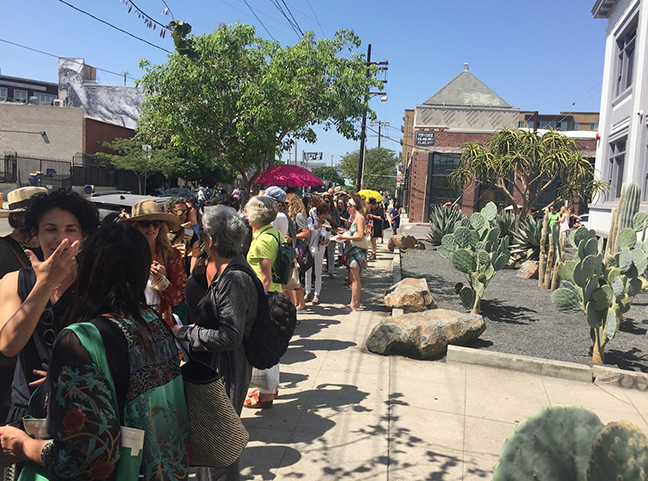 Artists line up to participate in “Now Be Here” on August 28, 2016 at Hauser Wirth & Schimmel. | Photo: Beatriz Cortez.

Ali Kheradyar: Moments like this change us. They change us for a number of reasons. They remind us that we are not alone and that we are connected to a vibrant community of powerful and creative women. It also reminded me that we all have work to do. Work for ourselves and for our own fulfillment, for our families, and for society as a whole. It reminded me that we can sometimes lose touch with our purpose in our art and in our lives.

Kyungmi Shin: The gathering turned from an art event to a meeting of old friends. As I went from one old friend to another, something was shifting. By the end of the event, I had connected with close to a hundred old friends and acquaintances, and I was profoundly touched.

KA: I invited my mother to attend. Fran “Schatzie” Hoffman lives in the neighborhood of the gallery. At age 96, she was one of the oldest of the artists present. When I was eight in 1960, she began painting. After my stepfather died, she promptly changed the master bedroom into a studio, played jazz on the radio, drank wine, and made large abstract paintings all day long. I didn’t know where she slept, only where my bedroom was located, and I knew not to bother her. So, “Now Be Here” gave me something important. It gave me the ability to see my mother acknowledged as an artist. 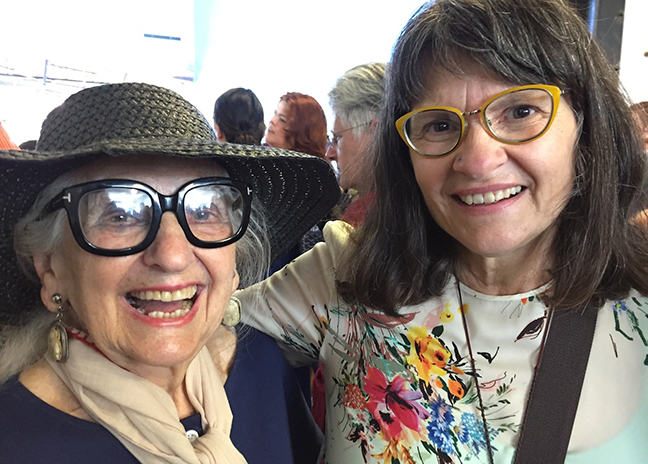 Carmen Argote: Being completely surrounded by women artists was overall a very powerful and transformative experience. I’m not going to linger on the actual photo, but on the process of getting my number because for me, that was the most meaningful. As I was tightly squeezed, between artists’ bodies, trying to get to the A-E section of the check in table, time slowed down. I was happy to see artists that I had not seen in years, friends, mentors, artists whose work I admire, artists I did not know.

KS: Perhaps being in one physical space suggested a community, though it was a one-time occurrence. Perhaps it was a visualization of the possibility of a community that was so inspiring. The power of connecting to one another in the same physical space was multiplied by hundreds. There was a sense of breaking down of hierarchies, boundaries, and generations.

CA: Looking around I did notice that many of the artists were a bit older than I was, many were also white. I enjoyed the letting go of my name for a number (#67) in order to merge with the collective energy of the multigenerational group of people who create, who think and see in their creative voice. This is what made me feel empowered, to merge and to not isolate myself into myself. There was a form of joy that was subtle and powerful.
“Now Be Here” by Kim Schoenstadt at Hauser Wirth & Schimmel
Artists line up to participate in “Now Be Here” on August 28, 2016 at Hauser Wirth & Schimmel. | Photo: Beatriz Cortez.

KF-M: As I looked around I was struck by the enormity of the compiled life experience of the women at the shoot, and how a school founded right then and there could draw on that experience for decades to come; it felt like a slow-burning fire with vast acres of fuel — a university of women artists. I also kept thinking about my time in grad school, and how many women I’d had as professors — a grand total of two.

AK: And while it was a glorious event that felt full of celebration, I was keenly aware of everyone who was not present for the photograph. I was happily surrounded by many loving faces, but also missed many of my brilliant transgender and queer friends who are artists working in Los Angeles. This event made me think about privilege and question my own. I asked myself why I belong in the photograph, even though I know my own reasons for being there. 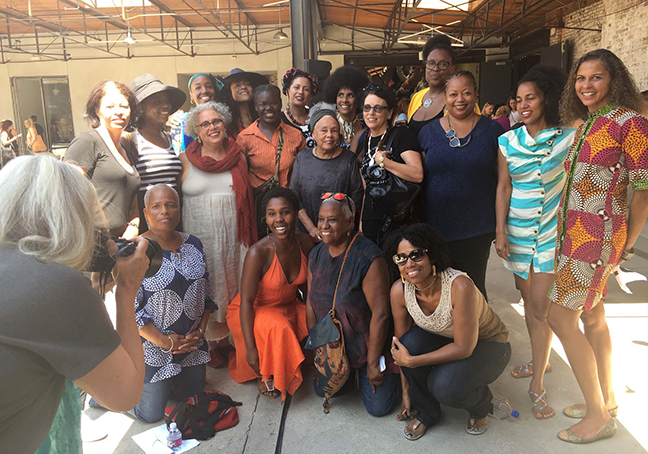 KF-M: After the main shoot a group of artists of color gathered for a photo, and other artists assisted by taking photos for us with our respective phones. At the center of the photo was the lovely Betye Saar, standing near her daughters. One of us confessed to feeling anxiety as she wondered where her fellow artists of color were, and then being gratified when she realized that we were indeed represented.

AK: I want to say thank you to all the self-identifying women who came to take a photograph together, in solidarity. As artists, we are able to be ourselves and do the work we love because we have many in our lives who continue to lift us up. I am grateful to be working in this community in Los Angeles, and to be an artist among fellow artists. You inspire me.

LB: A deep sense of gratitude also overwhelmed my heart. I was grateful for the opportunity to be present in a space full of so much creative estrogen. My disappointment at the dearth of artists of color represented, relative to the number of attendees, was overshadowed by the joy and appreciation I felt for being able to commune with so many women artists in one space.

CA: Being there, there were questions that kept on creeping up like a ghostly presence. Why here at Hauser Wirth & Schimmel? (Are we hoping the prestige rubs off?) Who’s not here? Was this open to all or in what way was it self editing? There are so many of us, why don’t I know most people here? I have no idea who that person is that everyone is taking pictures of.

KS: After the exhilaration of the experience and the re-living of the experience through photos and social media, I am reassessing the event with these questions. Did the lack of male presence/gaze make a difference in the experience? Did my 20-year history in Los Angeles make the experience more profound? How did young artists feel? Why wasn’t I seeking out more Asian sisters at the gathering? Why did I feel like I should have been included in the Black artist’s group portrait? Is it OK to have this community experience at a for-profit gallery space? And should we create more gatherings like this? 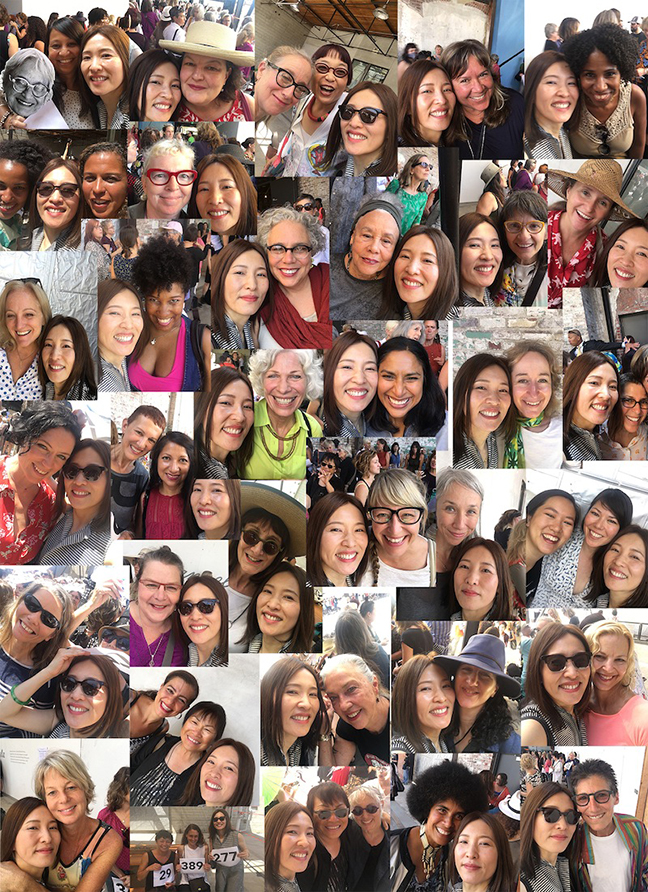 CA: It seems that we are at odds with ourselves, the joy of merging means a sort of letting go for what we have worked so hard to get, a form of recognition, in an art world that excludes women artists. That empowerment that I felt was real, but is it at odds with notions of success? I’m going to linger on the best moment because that is the one that matters most to me right now, that feeling that being a women artist was a powerful thing, that the group was an energy source and that networks and who you know and don’t know is a secondary thing.

BC: It was clear soon enough that the piece rebelled against identity politics. There was a spontaneously formed, unexpectedly large, collective gendered subject here that was much more important than any well-known or emerging artist as an individual. It made me think of the collective gendered nomadic subject that Rosi Braidotti talks about, or the spontaneous expressions of democracy that Spinoza described, a motion that made one think of an anthill or of molecular organizing, of all the potentialities.

KA: “Now Be Here” was an extraordinary event, a monumental gesture in all its greatness and tenderness. Articles appeared listing the names of a handful of artists from high-end galleries. How ironic that the effervescent and enduring sound of all our female voices needed to be framed within the traditional scope of patriarchal institutions. I had a horrible feeling that despite the best intentions, the scraps are few, the societal structures so secure, that our role as artists, that female sort, is only for decorative purposes, brought out on holidays like dusty Christmas tree lights.

BC: I know that the art-world will try to settle this image, to classify it, to name it, but in my mind this collective nomadic gendered subject is still bubbling. Even as I read the notes in the newspaper listing some the women in the courtyard who have gallery representation, even as I read the phrase “Now Be Here” that the artist, Kim Schoenstadt, chose as the title of the piece, I always return to the thought of the ants and the molecules because it is an image with a content that does not relate to the past, it is an image of the future.