It was a quarter past 10, her kids were at school and the house was almost calm. The visual artist—Lili Bernard greeted me at the door with open arms and bare feet. We hugged as she introduced herself and pointed toward two black sofas in the corner of her living room. She plopped down, stroking her curly Afro and gazing intently at me as if to predict my questions. 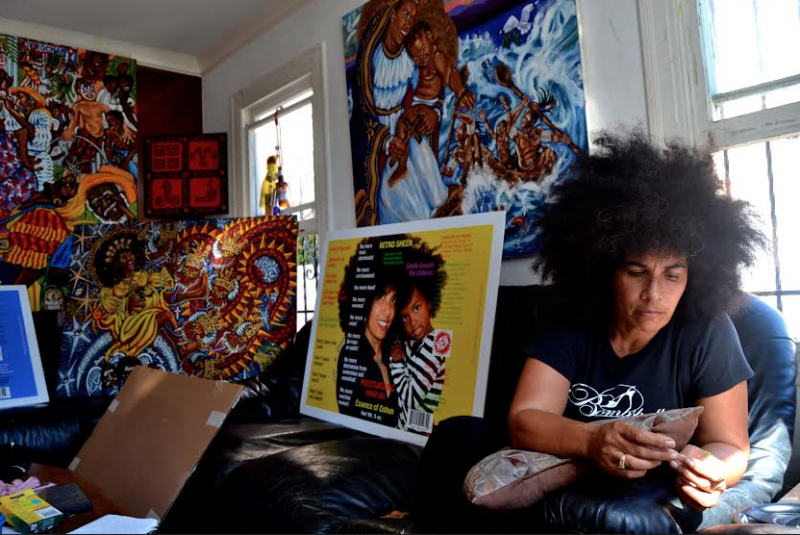 “Let me tell you a little bit about myself.”  Lili began to describe her life story: born in Santiago de Cuba, first two years of high school in New Jersey, last two at the American School in Japan and then off to Cornell before quitting to work as an actress and finally focusing on her truer calling as a visual artist.  As she shifted her body on the sofa, she painted her words with sweeping hand gestures. I glanced around the room at the paintings that covered almost every inch of the walls and the miscellaneous shapes of dripped paint that trailed across her hardwood floors.

“Would you like to see some of what I’ve done?” Lili blurted excitedly, and soon she was leading me through the kitchen where her husband was preparing breakfast and into a mini-studio which also functioned as her office. Spanning from the edge of the doorframe to the opposite end of the wall, the piece titled “Caroline” portrays a slave woman lying in bed just moments before/after being raped by her master. “I flip the iconic, classical European paintings to tell slave stories”, Lili said. Wearing a Scolds bridle over her head, shackles on her neck, wrists and ankles, the slave woman weeps with eyes that beg for salvation. The appropriation of Edouard Manet’s “Olympia”, “Caroline” is set in Kingston, Jamaica in 1886. Lili went on to describe the painting as “a portrayal of the racial self-hatred in Carribean culture” and within her family. Not only had the hatred of Black ancestry become a part of her lineage; she grew up with it.

Growing up, Lili had become used to being ridiculed with racial slurs by the students at her predominately white elementary school, but it wasn’t until the fifth grade that their harassment lead to a true analysis of Lili’s heritage. “I was 11 when I went home and told my mother that the kids at school were calling me a nigger.” Lili was born in Santiago de Cuba, Cuba where she says colorism and a caste system are engrained in Cuban culture. Lili was three years old when her family first moved to America, settling in Brooklyn and then to Princeton Junction, New Jersey where discrimination was rampant. “Tell them you’re not a nigger, that you’re not Black, you’re mulatta”, her mom said.

Lili’s mom is of Chinese, Jamaican, and Spanish heritage and her father having Cuban, Jamaican and Spanish roots; both of them grew up in Cuba. Her fair-skinned parents are considered mulatto in Cuba, but in America mulatta is often associated with having Black heritage. After going back to school to relay her mother’s classification, her classmates laughed at her. “Mulatto is black you dummy, you’re a nigger”, they said. The duality of Lili’s heritage, and the racism it prompted, eventually lead to a horrific incident on a hot New Jersey afternoon.

‘It was summer in New Jersey,” she recalled sitting still on her sofa while staring off into space. Wearing her short shorts and natural hair, she was riding her bike home from the library when a car began to follow her. “They just stayed on my tail.” Soon, the rowdy kids drove up on the side of Lili where she could hear the slurs at full volume. “They kept saying, ‘Get out of the way, nigger’, as they made fun of my shorts and my hair.” They laughed hysterically as they watched terror take over her body. “They were threatening what they were going to do to me.” She thought to herself, “they’re gonna kill me…I’m gonna die out here alone.” As the car became parallel to Lili, the moment shifted. They yelled,”Oh shit, that’s Lili!” Two girls in the front seat and two boys in the back were four of her best friends. This horrific memory impacted Lili tremendously but never took her mind away from achieving her goals.

As a student on scholarship at Cornell University, Lili majored in Fine Arts and German. “I was unfocused, but knew I wanted to be an artist.” She went on to get her degree in German from CUNY and continued to pursue theater. In pursuit of more acting opportunities, Lili moved to California in 1993. She dressed her newfound apartment in her art with portraits and cityscapes on every wall. In the midst of these evolving moments, Lili was offered a life-changing opportunity.  One afternoon, she invited some friends over to her home. “Warren Drummond is a great film, storyboard artist. He and his wife, Betty Bynum are good friends of mine”, said Lili. They noticed the passion and in-depth story telling featured in Lili’s work. “Have you ever though of exhibiting?”, the couple asked. “And I said, ‘What do you mean exhibiting?’” From the day when her mother taught her how to draw a bird in their Brooklyn Brownstone, at the young age of four, Lili had always created art. It was a part of her, but she never considered making a career out of her passion. Yet, Warren’s suggestion sparked Lili’s curiosity. She wondered if she could make her artistic dream come to life.

Screenwriter  and author, Betty Bynum gave Lili her first opportunity to showcase her skills by featuring Lili’s flyers in the play bills of the stage reading for Bynum’s screenplay. It was there that a Toyota representative from the audience approached Lili and invited her to The Annual Black History Month Art Show at Toyota National headquarters inn Torrance, CA. This event would initiate her career as a visual artist in 2007. All of her practice as young child, recruiting neighbors for roles in her plays, decorating flyers and the set, finally paid off. Lili also carried her collaborative spirit into her new career incorporating her artist friends into what turned out to be shared goals among the artists.

In August 2009, Lili started an “adult artist collaborative for underrepresented artists of all ethnicities” called HABLA – Harvesting Asian Black Latino Artists. Influenced by her Chinese, Black and Latin heritage,  Lili and her colleagues held artist talks, monthly meetings, critiques and over eight exhibitions titled HABLA Underground. For five years, Lili managed her very own studio in Chinatown. Through these endeavors of supporting fellow artists of color, Lili discovered that the most marginalized artists were in fact Black.

This led Lili to found another initiative called BAILA – Black Artist in Los Angeles: a movement developed for Black visual artists to highlight their work and advance their careers in Los Angeles. From research and organizing roundtable discussions between BAILA and mainstream arts organizations to curating BAILA exhibitions and mentoring BAILA adults and youth, the organization’s objective is for Black visual artists to be acknowledged.

By incorporating and prioritizing diversity amongst her colleagues, Lili became more comfortable with her identity as an Afro-Latina woman. Simultaneously, she embraced her roles of being a mother and wife, also including her family in her projects and discussions. Last summer, Lili and her family went to visit her parents in Spain. Just three years earlier she began wearing her hair natural, out in an Afro style without any bands or chemical alterations. “You’re too good to wear your hair that way,” Lili’s father told her. For this reason, Lili’s mother expressed that she would not go out in public with her. So, to appease her parents, she wore her hair tied up, with her roots pressed to her head and an Afro bun on top. While frustrated, Lili understood her parents’ concerns. Her parents grew up under the rule of Fulgencio Batista y Zaldívar whose rule ended in 1959 along with the Cuban Revolution. Lili recounted her mother’s descriptions. “Clubs and sidewalks were separated and designated according to White, Mulatto, and Black.” As a result, Lili appeases her parents and understands their opinions based on the time when they grew up.

In connection with her childhood, Lili places emphasis on religion in her art featuring Cuban deities in her works. One Orisha in particular, the “Orisha Oya-Yansa”, Lili describes, “stirs disruption up like  a tornado in order to bring calmness and love afterwards.”  From her portrayal of spiritual deities to incorporating her family’s images in her work, it’s clear what Lili holds dear to her heart. “Really, my making these paintings is like trying to fill a void in the halls of Art History. I’m trying to insert a narrative that has been omitted and that’s slavery.”

As a mother, Lili has cultivated the talents of her children ranging from song and dance to painting and sculpting. Included on her website are photos and videos of their compilations along with the work Lili has developed over the last 20 plus years. Currently organizing roundtable discussions and curating art exhibitions for BAILA with art spaces such as The Getty Museum & The Hammer, Lili continues to advocate for the artist community.