Presented first at California African American Museum, in Los Angeles, on June 15, 2013, Orishas Through the Crossroads and the Gate is an installation, public engagement performance game and art workshop. It metaphorically explores the impact of colonialism as it pertains to privilege, access, boundaries and transcendence. 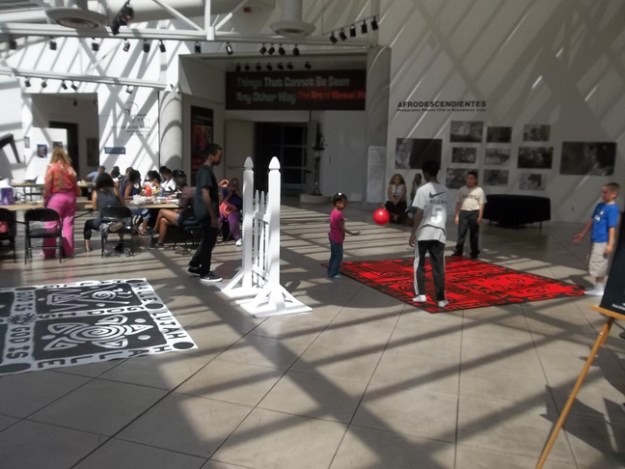 The installation is a space where, through physical play, participants momentarily escape from the pressures of daily life, while their subconscious delights in memory and imagination. For some, the performance game and art workshop elicit intercession from the spirits of the ancestors.

The performance incorporates the popular childhood game of Four Square, stylized in a theme of Afro-Caribbean folklore and religion. It specifically references the syncretism of the Orisha (African deity) Elegua who is seen as a child, and his European (Spanish) counterpart El Santo Niño de Atocha (the Christ Child). The metaphor stems from the biblical passage which states that if we are to enter the Kingdom of Heaven, we must be like children. (Matthew 18:3).

Indulging my daughter Zion in a game of Four Square. PHOTO George Evans

Participants learn the following history via educational dialogue during the art-making, and from informational take-home postcards I create: El Santo Niño appeared in the town of Atocha, in 13th Century Spain, when the country was under Muslim rule. Christians were persecuted and imprisoned.  An edict stated that prisoners could only receive food if brought to them by a male under the age of 12. At a statue of the Virgin of Atocha with her Christ Child; townswomen prayed for God’s intercession, so that the childless inmates would not starve to death.  People reported that a boy, dressed as a pilgrim, began appearing, bringing food and water to the inmates.  Each night, after a sighting was reported, the shoes of the Christ Child on the statue appeared dirty and tattered. The women interpreted this as a sign that it was the Christ Child who was feeding the prisoners.

Some play while others create art.

Performance-workshop participants also learn that Elegua, the Orisha with whom the Christ Child is syncretized as a result of Criolization, is considered in Yoruba to be the keeper of the crossroads and the gate, of the coming and the going, of opportunities.  Also appearing as a boy, he is the spirit who tests you, and asks, “Which path will you take to where you want to go?”  His favorite number is 3. It was therefore that the enslaved chose the name of the Christ Child behind which to disguise Elegua, in order to avoid persecution when practicing their religion. Eventually, Elegua became one with the Christ Child, as did other Orishas with the Catholic Saints behind whose names they hid. A new religion was formed, known as Santeria in Spanish and Candomble in Portuguese.

Educational dialogue about the Orishas and Criolization occurs throughout the art -making. PHOTO George Evans

During the dialogue, I tell the folklore which explains why Elegua is represented by the colors black and red or black and white.  Two brothers in Africa were fighting over a dispute. One brother proclaimed, “I just now saw Elegua and he was wearing a black hat!” The other brother retorted, “No you didn’t! I saw Elegua, just now, and he was wearing a red hat!” (The story was also passed down, substituting the color red for white.) In the midst of the brother’s almost bloody battle, Elegua appears, wearing a hat that is black on one side and red on the other.  He says to the quarreling brothers, “You both saw me.”  The folklore metaphorically serves as a reminder that there are many different perspectives from which to look at the same thing, and that all viewpoints are valid. This is part of the concept explored in Orishas Through the Crossroads and the Gate.

Participants commented that it was a meditational experience. PHOTO George Evans

The installation is composed as follows. There are tables arranged in a square, for the art workshop. Nearby are two Four Square mats (96″x96″ each) on the ground in tandem, approximately eight feet apart. One square, representing Africa, has been hand-painted in black and red, with praise words in Lucumí (Yoruba) and symbolism for the Orisha Elegua. It has a red bouncing-ball on top of it.  The other square, representing Europe, has been hand-painted in black and white, with praise words in English and symbolism for the Christ Child. It has a white bouncing-ball on top of it.  In the center of the gap, between the two Four Square mats, stands a white picket gate.

Many hands toiling together make the labor light and swift.

In memory of the enslaved ancestors, participants are invited to labor first, before playing the game.  The group (each participant with a brush in hand) paints the gate white, with fast-drying paint.  Meanwhile, I begin the interactive lesson on the Orishas as they pertain to Criolization. The performance becomes dialogical. While the paint dries, we move to the art workshop tables, where I invite participants to create their own miniature Orisha Four Square artwork, with provided canvas boards, paint and mixed media.  I continue the lesson as the participants create.

Participants create Four Square art of the Orisha with whom they most identify. PHOTO George Evans

Once the gate has dried, participants are invited to play Four Square.  Two groups play simultaneously on either side of the gate. When a player wins, she or he can cross through the gate in any performative manner desired, and place  herself or himself in the line to commence playing the game on the other side.

Some come to the event already familiar with Afro-Caribbean folklore and religion and impart knowledge to others.

Through the use of poetic playfulness, the performance game raises the following questions: “Who are the gate keepers in your life? What are the obstacles you face? Where are you trying to get to? What do the two sides represent to you? On which playing field will you engage?  Will you labor before you play? Will you play on both sides, or just one?  On what side will you start? Where would you like to end up? Will you go through the gate, back and forth, or in just one direction?  How will you get to the other side?  Will you open the gate and walk through? Will you run around it or jump over it? Will you move the gate aside? Will you roll the ball through it first and chase it? Or do you prefer to remain on one side? Will you act as a gate keeper or gate opener, as others attempt to cross over to the other side? 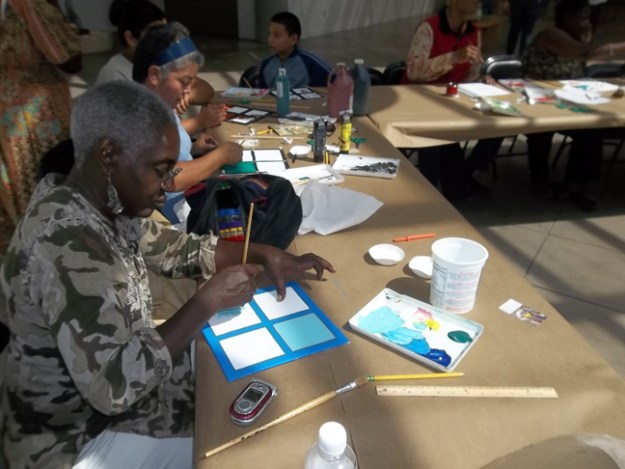 Cola Smith makes Four Square art of the Orisha Yemayá who accompanied the enslaved across the Middle Passage.

The participants take home their artwork as souvenirs of the event and as reminders of the therapeutic and nurturing nature of play and creativity.

Scroll down for more photos of the work.

Making of the gate from scratch. My dad taught me carpentry skills when I was a child, as did his dad to him in Cuba.

At work at home, creating the two Four Square mats for the museum installation.

At the museum, in honor of the enslaved ancestors, we labor first, before we play. PHOTO George Evans

The painting of the picket gate is a dialogical, educational and meditative excercise in memory. PHOTO George Evans

A view of the art workshop from afar

The event at the museum lasted three hours, from beginning to end. Participants came and left as they pleased.